Kevin O’Shaughnessy began life with some challenges. He had an auditory processing disorder, required speech therapy, was prone to sensory overload, and was painfully shy. His older brother, Brian, was his protector, leader, and interpreter. Once he started school, he was diagnosed with dyslexia, which made conventional learning difficult.  In the land of “normal,” he struggled to find his own place in the world.

First: What makes normal so desirable?

Well, you know when you’re different, you feel left out.  It’s hard to find where you belong.  You look at your brother who’s liked by everybody, he’s funny, always making friends, and then there’s … me.  Somehow always outside the circle.  When you’re a kid, you don’t think it’s okay to be different.

When did that change? 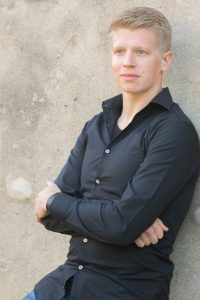 It took a while.  First, I was always very competitive.  I didn’t understand that not everyone likes competition, because to me, it was fun.   So I would just compete with myself.  Other kids would be goofing off, and I would be doing pull-ups by myself, seeing how many more I could do than the last time.  I was homeschooled, and some of the older guys in our homeschooling co-op would work out.  I started out sort of wanting to be like them, but then I got addicted to exercise, and again, competing against myself, trying to keep improving my performance.  Eventually, I found other like-minded people who loved competition too.  I also felt good about myself as I continuously improved on the things that I was really good at. In high school and early adulthood, I tried a few different jobs where my bosses liked me, and I did well, but never felt I’d found my niche. I couldn’t see myself doing anything for the rest of my life.  I just didn’t really know who I was or who I was meant to be, so it still took a while to sort that out.

How did the shooting thing play into that?

My dad taught me and my brother to shoot when we were very young.  He was a former Army captain and pistol team lead, and he had been around guns most of his life.  There were always guns in our house, and he wanted us to be safe.  He started by teaching us how to check that a gun was unloaded.  He let us handle it, and told us that if we were ever curious and wanted to hold the gun, he would always stop what he was doing so he could give us that opportunity.  He wanted to take the mystery out of it, so we wouldn’t sneak around and try to play with a gun on our own.

Did you ever do that?

Nope.  There was no challenge to sneaking when it was already so much a part of our lives.  We’d go to the range on a Saturday and spend a few hours there.  Dad would kneel down behind us and put his hand on top of ours so he could guide and protect us.  He called it “four-hand shooting.”  He was really doing the shooting, but teaching us how to safely handle the gun. When he wanted to do his own shooting, my mom was always there to keep an eye on us. It was so normal to us, we never thought of doing anything unsafe.

Were you a natural?

Well, not really … not at first.  I was into action, and shooting required taking your time.  You don’t blast into the Wild, Wild West like some people think.  You have to learn to hold steady, aim carefully, check the perimeter, practice, practice, practice  … and that was just boring to me as a young kid.

Then how did you get hooked?

A few things:  One was just continuous exposure.  It was a family thing to go to the range and shoot.  We all did it, and in time I became good at it. Two: I watched a lot of shows about military dudes.  I thought they were really cool, so it became a goal to develop the kinds of skills they had.   I also happen to be a very focused person, and my focus helped me develop good shooting habits.  I had sort of a natural talent, I guess, but it was discipline that brought it out.  Just like everything else, I liked being good, and when I got good, I worked hard at getting better.

How good are you?

I usually only tell this story to family and close friends, but … sometimes at the range I’ll see a fly on the target.  I can’t resist trying to shoot it.  I’ve made the shot several times.  Once a guy came around and said he wanted to take lessons from the guy who could shoot a fly off the target.  I guess he’d heard the story from one of my clients.  It’s just another way to challenge and compete with myself.  If I did it once, was it a fluke, or can I do it consistently?

So you just decided you wanted to teach other people how to be cool and shoot a fly off a target?

Oh, there’s a lot more to it than that.  While it may come more naturally to some than others, I believe that anyone who is willing to learn, and disciplined to practice can learn safe gun handling, the enjoyment of shooting, and defensive use of firearms.

What do you mean by the defensive use of firearms?

I will teach anyone who wants to learn to shoot, even if they just want the fun of hitting a bullseye.  But my real passion and emphasis is teaching people how to use guns to defend themselves.  Firearms are a force equalizer.  The average woman is not as strong as the average man, but the smallest  woman who is being attacked can defend herself with a gun just as well as the biggest man.  A disabled guy in a wheelchair may not be able to run away, or to go hand-to-hand in a fight, but he can defend himself with a gun.  There are a lot of bad guys out there, and good people shouldn’t have to suffer because of them.

Aren’t there a lot of laws around gun use that most people don’t understand?

Absolutely.  That’s a part of what I do. In my classes, I teach about laws applying to gun ownership and shooting.  I am not a lawyer, and I don’t give legal advice, but I do want people to be aware of the laws that affect gun ownership and use.  Shooting is not merely great sport; it is a great responsibility.

Besides being a good shooter yourself, what makes you a good instructor?

Loooooots of practice.  Not just practice shooting; practice teaching.  I remember my first class. There were all of two students in that first concealed carry class.  One of those students, Glenn, wrote in his review, “I took the concealed carry class, and learned more in this class than in a previous class taught by older pros.  The class was interspersed with shooting skills and shooting for fun, with practicing loading, unloading, fixing jams and misfires.  Excellent class taught by a competent instructor.”  That was a very gracious review, and I appreciated it, but when I look back, wow, let’s just say I think there’s been a lot of improvement.  It’s because of people like Glenn who gave me a chance that I’ve been able to improve my teaching skills.  My friend Caroline said, “I had never been around guns before my class. I was a bit nervous, but once we started, I felt at ease. Safety was a priority right from the beginning. Kevin was extremely knowledgeable and had an answer to every question. If you’re curious about guns and want to gain some experience, Kevin is your guy. It was a lot of fun too!”

It feels good to go out to the range with someone who is nervous and then hear that they not only learned, but had fun and felt more at ease after their session.

Is your dad your only teacher?

Oh no, I’ve had a bunch of opportunities to learn under people who are much better than I am.  I have studied under law enforcement veterans here in Delaware, as well as nationally renowned organizations: Warrior Poet Society, Tactical Response, and Defensive Training International.  One of my first influences was watching YouTube videos of James Yeager at Tactical Response.  I learned a lot about practical defensive shooting from him. I was able to take some classes at his facility in Tennessee a couple of years ago. John Lovell at Warrior Poet Society has had a huge influence on me both in shooting and defensive mindset, and in philosophy.  He is a Christian, and I love that he infuses that into everything he does.  That’s just a sampling.  I believe you should always be looking to people with more experience and skill than yourself in order to increase your own abilities.

Now that we’ve talked about how you got started shooting, and about teaching others, tell us how you came to make a business of firearms training.

I had a couple of great mentors, great men, who saw something in me than I saw in myself.  They encouraged me to use and develop my skills for something beyond myself. They also kicked my butt when I needed it. They lent their own business and technical expertise that I don’t have to help me get things off the ground.  They still mentor me.  I don’t think I could make it without them.

How did you come up with the name Reliance Tactical?

Tactical for obvious reasons.  I’m not just a shooting outfit.  I want people to learn to be intentional in their use of firearms for self- and home-defense.  Reliance because I want people to know that I and my instruction are reliable, and when they practice what they learn, they can be assured that they are reliable for their own defense. Our slogan is a direct quote from Thomas Jefferson:  “Educate and inform the whole mass of the people. They are the only sure reliance for the preservation of our liberty.”  That’s what Reliance Tactical is about – reliable education so that people can be self-reliant for their own protection, and for the preservation of liberty.

Do you have any formal credentials?

I am an NRA-certified instructor.  I am also approved by the State of Delaware and the State of Maryland to teach concealed carry classes.

What kinds of classes do you offer?

Besides Delaware and Maryland concealed carry, I offer beginner pistol, advanced pistol, defensive rifle, and private sessions that cover anything the student wants to learn.  Since Reliance began in late 2018, I’ve  trained more than 400 people.

Anything new on the horizon?

We just purchased a shooting simulator.  By using a projector, the student can safely experience realistic scenarios where they can learn more about how to judge when and how they should or should not fire their gun.  We plan to begin offering sim classes in the near future.

What would you say to someone who is considering coming to you for training?

Whether in the classroom, on the range, or in the simulator booth, Reliance Tactical strives to give students the very best knowledge and instruction in firearm use in a fun, safe environment.

California sues 3M, Dupont and 16 other companies over ‘forever chemicals’