Dina Manzo Provided an update on Her relationship with Teresa Giudice Over the weekend on Her Instagram Story.

After skipping Teresa And husband Luis Ruelas‘ wedding in August, the former Real Housewives of New Jersey Cast member reacts to one of her fans who wanted to ask if she and Teresa They had rekindled their friendship following their alleged fall out earlier in the year.

“Are you and Teresa friends again?” The fan asked. As seen in the screenshot shared by Bravo and Cocktails on Instagram on November 13.

“We were never not friends,” Dina replied. “Sometimes friendships go [through phases] but in the end true friendships will always find their way back when the time is right.” 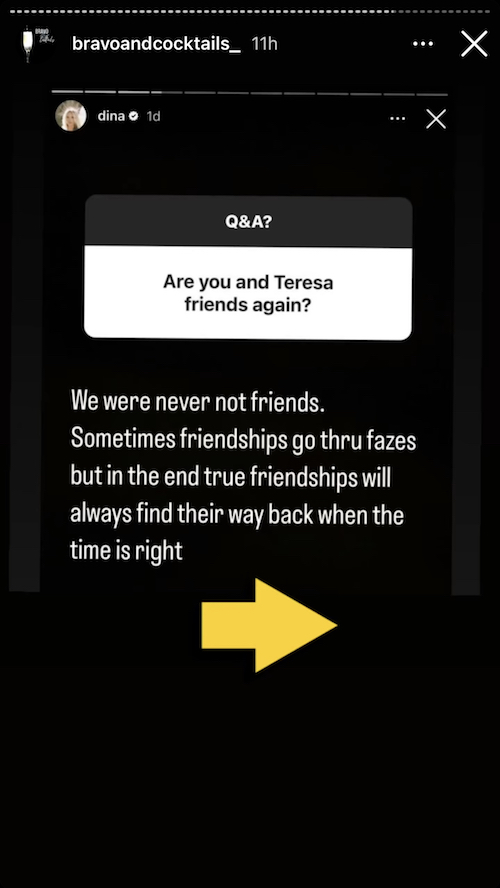 It was first noted in July. Dina You would be skipping Teresa and Luis’ wedding, an insider said the RHONJ alum had chosen to sit out because the event was being filmed for a Bravo special.

“Dina has made it clear that she does not want to be on camera, and Teresa is OK with it,” Page Six was informed by a source. “Teresa respects Dina’s wishes and looks forward to celebrating with her in the future. They remain as close as ever.”

However, after Dina A series of cryptic posts were shared amid Teresa and Luis’ wedding weekend, fans began questioning the true status of their relationship.

However, when asked about the topic on her podcast, Namaste B$tches, Teresa Claim Dina’s statements were not in regard to their friendship.

“I was in my love bubble so I really wasn’t paying attention to what was on social media and what wasn’t… But I heard she made a comment to fan, which I saw that she was saying that it had nothing to do with me,” Teresa revealed.

Teresa She also spoke out about her relationship with Dina on The Two Ts in one Pod Podcast where she stated that she understood why Dina Was unable to participate in her filmed wedding.

“We’re all good,” Teresa confirmed. “Once you are on TV and then you aren’t on TV anymore, you don’t want to be in front of the camera. I totally get it. It’s like you’re working, and you don’t want to work. Unless you are getting paid. And the thing is not that she wanted to even get paid, but I get it. And her husband [Dave Cantin] doesn’t want to be on camera.”

“I respect that,” She continued.

Kathy Hilton on What Was Left Out RHOBH Reunion, Kyle Run-in